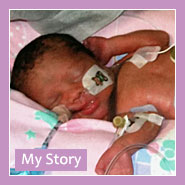 On the 13th November  I left home in Limerick to travel to Kilkenny for a night away with the girls. At 3am in the morning I started to feel unwell and getting pains. When I reached the hospital I was in labour and given steroid injections for the baby’s lungs. They put me on a drip to stop my labour. On Sunday morning, I was moved to Waterford Regional Hospital to be near N.I.C.U. Here I met up with my husband JJ and my mother .On Monday I received the next steroid injection but my labour started up again.

On Tuesday morning things started to go wrong so I was rushed for an emergency C-section and at 1p.m Orla Marie Carr was born at 27 weeks and 4 days weighing 3lb 1oz. My husband JJ said he will never forget the first time he saw her in the doctor’s arms, so tiny, so fragile.

I didn’t see her till the following day which was upsetting and nothing could prepare you for the shock of seeing your baby in the N.I.C.U for the first time. he first week in the hospital went fairly well; Orla was gradually being weaned off the ventilator. Her weight dropped to 2lb 9oz and her glucose levels dropped. As her mother, I wasn’t able to do much for her but I expressed milk which they started giving her at a rate of 0.5ml per hour.  Seven nights after Orla was born it was time for me to leave the hospital; this was very hard, going home without your baby. We were very lucky to find somewhere to stay, five minutes from the hospital with a fabulous woman called Tina, who gave us a room in her house and this was to become home for the next seven weeks. It was also time for my husband JJ to go back to the work but we had great support from our family as someone stayed with me every night. Orla was taken off the ventilator after eight nights all due to the fact that I had got the steroid injections so fast. Getting to hold Orla for the first time was very precious and  simple things like changing her nappy and doing her cares gave us time to bond with her, this became part of our daily routine of in and out to the hospital.

I was still expressing milk but when the time came to feed her we decided to bottle feed her my milk as this way we would know how much she drank. The highlight of our week was when Orla got weighted, followed by many phone calls and text to tell people her weight gain. The next big move was to the isolation area, the last step before going home. Here Orla had a room of her own which was so quiet compare to the hustle and bustle of the n.i.c.u.  At one point there were talks of moving back to Limerick but we decided to stay just in case the long journey set her back.

Leaving Orla in the hospital on Christmas day was one of the hardest things we ever did, but the day came and went and we moved on knowing there would be many more Christmas days to celebrate.

On New Years Eve we were told Orla needed a blood transfusion but it did her the power of good, as two days later we were told it was time to take Orla home. On Wednesday the 5th of January we left the hospital and Orla now weighted 5lb 2oz.This was a very happy day with lots of celebrations. The first few months at home were hard, Orla was poor to take her feeds, suffered with reflux and colic so she cried a lot and didn’t sleep much. This was a very stressful time but once she settled (at 11 months) life got much easier and family life was great. We had to go back to Waterford for check up but at the age of two we were told she was doing so well we didn’t have to go back any more.

Orla has no effects of being born premature apart from been very thin, but as a girl I’m sure this will make her happy for years to come. Orla is now a beautiful, bright loving ten year old girl and every day she brings us much happiness and we are blessed to have her in our lives.