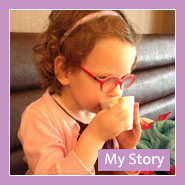 My pregnancy with Ellie May had been textbook perfect until 20 weeks. At my 20 wk check –up my blood pressure was raised so I had more regular check-ups. At 26 weeks, I was admitted to hospital for BP monitoring. After 3 days I had a slight bleed and told the midwife, things happened very quickly from that point on. I had a major haemorrhage which turned out to be due to a placental abruption. Ellie May was born within an hour of the initial bleed by c section under general anaesthetic. She weighted 1lb 14oz and had to undergo prolonged resuscitation. She was born in Portlaoise hospital as there had not been enough time for a transfer. Once she was stable enough she was transferred to the Coombe hospital. I was in intensive care overnight and it wasn’t really until the next day that I fully realised that she had been born or what had happened. She was ventilated for the first 24 hours and then put on CPAP and was managing quite well although we were told the first 72 hours were critical.

Her initial cranial ultrasound was normal. I didn’t get to see her for 3 days until I was well enough to be transferred to the Coombe. Looking back that is one of the things that still really upsets me, thinking of how much she was going through and I wasn’t there or wasn’t even aware of it. Seeing her for the first time was one of the most difficult and emotional moments of my life, she was so tiny, much tinier than the pictures had conveyed. Her skin was virtually transparent, between CPAP mask/hat and jaundice lights etc, tubes, wires and monitors. I couldn’t really see her properly. She had so many wires and lines attached to her it was hard to believe and very hard to take in.

At 10 days old, Ellie May became very unwell very quickly. She had developed septicaemia and required ventilation again. We were told that this was a life threatening infection and that again the next 72 hours were critical. It was an extremely difficult time, Ellie May had multiple transfusions, a central line, a spinal tap. Thankfully she responded well to the antibiotics, after 10 days she pulled out the ventilation tube herself and was back on CPAP and improved slowly and steadily from there.

It seemed to take forever before Ellie May wore clothes, came out of the incubator and into a cot, came off CPAP, took her first bottle. But she did do all of those things and after a very long 11 weeks we very nervously took her home.

She is 4 now and doing very well and we are extremely proud of her and feel very lucky. She has had some struggles, vision problems and some development delays but she is a very happy little lady and we are confident that she will overcome all of these little obstacles. 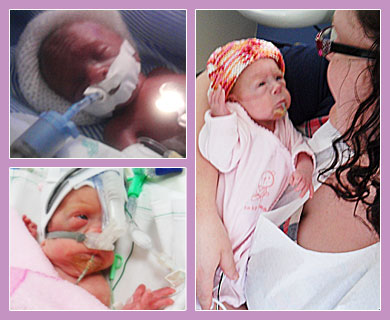 We made some great friends with other parents while Ellie May was in the NICU, this was a huge comfort and support to us at the time and also in the early days after leaving hospital. We were very nervous for a long time that Ellie May would get sick again and need to go back into hospital. It was great to be able to talk to people who completely understood our fears and shared them. We missed out on the usual new baby experiences of visitors and showing off your new baby etc. which was difficult at the time but Ellie May is a social butterfly now and more than makes up for it.