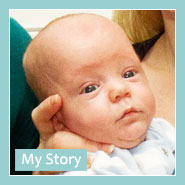 Our son Ciarán was born at 25 weeks gestation. He weighed a tiny 680g. 1lb, 6oz. He is now over 7 months old and a bouncing happy wee man.

My pregnancy was completely normal with no issues at all up to 24 weeks when out of the blue my blood pressure spiked and I was diagnosed with severe preeclampsia and hellp syndrome. At that time the doctors advised me that the baby was “viable” but that to give him the best chance they would try to get me beyond 28 weeks, it was so surreal, I felt fine, with no symptoms at all. I was admitted to Holles St at 24 weeks and after one week the doctors advised that we couldn’t wait any longer as they couldn’t stabilise my blood pressure and they needed to deliver our baby immediately.

Ciarán was born at 11.04pm on Sunday 5 October 2014. He struggled from the start he was unable to breath so he went onto a ventilator but even though things were tough so was he! From day one he showed us that he was a little fighter, stronger than we ever could have imagined!

He suffered cardiac arrests and required heart surgery at 29 days old, he was 1lb 9oz when he had the surgery. He finally got off the ventilator and graduated to cpap (on his third attempt) after 59 days. He developed chronic lung disease as a consequence of being on the ventilator so long. He stayed on cpap for one week he then moved to low flow oxygen. Due to his chronic lung disease he struggled to wean off the oxygen he was on 0.5 for 75 days, then when he was ready he finally came off low flow and stayed off!

He spent 141 days in Holles st, during this time there were many bumps in the road, he had a PDA in his heart, he required 11 blood transfusions, suffered from a number of apoenas, developed a bad infection but for every challenge and set back he faced he met them head on and slowly but surely he came out the other side.

After 141 days he graduated from the neonatal unit and came home with mammy & daddy. Since then life has been wonderful, he is our perfect little man. He’s eating solids, smiling and playing like any other little boy.

My advice to parents of a micro preemie, is to take it one day at a time and to try to stay positive. Lean on and support each other! Try not to compare you little one to other babies in there, they all have their own stories. There will be bumps in the road along the way but you will get through it, you will bring your little one home when they are ready.