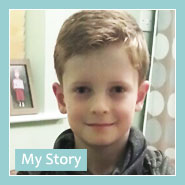 When I was pregnant on my son which started out as a normal healthy first pregnancy, I was admitted to Our Lady of Lourdes hospital in Drogheda in with Pre-eclampsia (Pre-eclampsia is a medical condition in which hypertension arises in pregnancy, pregnancy-induced hypertension  in association with significant amounts of protein in the urine). On the third day of observation I hadn’t felt much movement and asked to be put on the monitor to ease my mind, as I was a little concerned. It was then noticed that the baby’s heart rate was very weak, within a few minutes the room was full with doctors and nurses who were very concerned about my baby. The doctors then decided to carry out an emergency Caesarean-Section straight away. Caolum was born at twenty eight weeks on 6th August weighing 0.98kg (2lb 2ozs), less than a bag of sugar, as he likes to say himself. So our story began with life in the Neonatal Intensive Care Unit (NICU).

Caolum spent his first night in a turkey roasting bag, an effort to try and maintain his body temperature. He was also under the lights to keep him warm and hooked up to numerous machines and monitors. Caolum spent his first thirty six to forty eight hours on the ventilator which helped him to breathe, but the staff weaned him off it, allowing him to breathe on his own. Due to my own condition and recovery I didn’t get to see Caolum for the first forty eight hours. The NICU became his (and our) home for the next twelve weeks. Here he spent most of that time on Continuous Positive Airway Pressure (CPAP), fighting infections and receiving numerous blood transfusions.

The following weeks in the intensive care unit were like a rollercoaster with many ups and downs, Caolum had numerous blood tests, x-rays and brain scans. Due to his prematurity, Caolum would frequently stop breathing (known as Apnoea) .This would in turn lead to his heart rate slowing way down causing a drop in his blood pressure (known as Bradycardia). The staff, and ourselves after a while, would stimulate Caolum by rubbing or patting him to get him to start breathing again. Once these episodes became more frequent, Caolum would be put back on CPAP to aid his breathing. He also had digestive issues and on a few occasions had to be taken off milk for days, and slowly re-introduced starting with minute quantities, sometimes starting with 1ml per hour.

After nine weeks Caolum was moved out of the incubator and into a cot in the nursery were he thrived for the next two weeks. Caolum had eye tests to observe how they developed, and the first few weeks the prognosis was good. But that changed, the day before we were to take him home, it was noticed that his eyes were no longer developing as normal and an appointment was arranged with an eye specialist in Temple Street children’s hospital in Dublin. Despite the news about his eyes Caolum was allowed home with us that day. The next morning, he had to attend an appointment in the eye clinic in Temple Street. It was discovered that he had the advancing stages of Retinopathy of Prematurity (ROP). He was readmitted to hospital to rectify the Retinopathy. He underwent laser surgery the next morning in Holles Street Maternity hospital in Dublin and spent the next few days under observation. Caolum left hospital exactly one week after his due date. 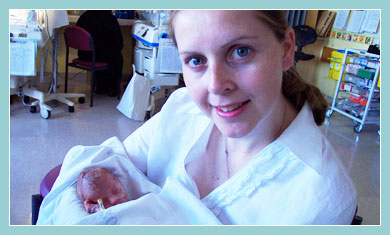 On reflection we feel very lucky that we live so close to the hospital so that we could and did spend as much time as possible with Caolum in NICU. At times we often felt useless, unable to help him but we were comforted and reassured when we gave Caolum kangaroo care (skin to skin contact with a parent and baby) on a number of occasions which resulted in his vital signs stabilising. In addition, because Caolum was our first child, every minute of every day and every ounce of our energy went into Caolum and his fight in NICU.

Since leaving hospital Caolum has had no major setbacks. Over the first few years Caolum was closely monitored with regular check-ups. Temple Street hospital continues to test his eyes periodically, but these appointments have become less frequent as he got older. In the last year it has been noticed that Caolum has not been meeting his growth milestones and as a result has been attending the Endocrinology Department in Our Lady’s Children’s Hospital Crumlin, where investigative tests have been conducted (and are on-going) to determine if Caolum needs treatment to help aid his growth.

Caolum is entering 6th Class this coming September, he is a happy and healthy eleven year old who enjoys all aspects of school life. He has become a confident child and mixes well with other children. He is the older brother to Cian, who thankfully was born full term and is now five years old. But Caolum will always be our little miracle. ‘Small in stature, Big in heart’.