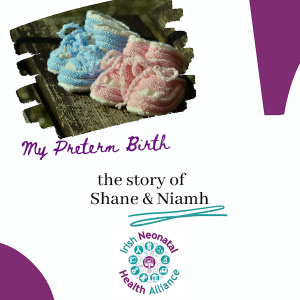 Early in 1990, after fertility treatment, I was pregnant with twins. I was 34 at the time. Shane and Niamh were born in November, a little more than eight weeks too early. Their birth weights were 3lbs 11ozs and 3lb 8ozs. Shane was born first and although he was small, his lungs were fully developed. Niamh was breech at birth, so she had a difficulty delivery. Her lungs were not fully developed. This meant that she was on a respirator immediately after her birth. On day 2 of her life, Niamh had several brain haemorrhages resulting in her death. I held her hand during that time, which was extremely difficult, and I found those last few moments until her little heart stopped beating to be harrowing. Niamh is buried in our family plot near our home, which is important to me. The staff in the hospital were brilliant at the time but a referral system was not in place. A support group would have been invaluable. I needed help and at the time I really didn’t know where to turn. I felt extremely alone in my grief for a long time. In the 1990s, discussing the loss of a child was taboo. It was something you just got over and got on with your life. I would really have benefited from a support group of other parents who were coping with a similar loss as well as some counselling but that was not available as a service. I needed an “It’s OK not to be OK attitude”. An atmosphere of ‘get on with it’ made me feel so much more isolated. I craved opportunities to celebrate and include Niamh in some way in our family but up until very recently, I felt that society was not ready for this.

Nowadays, thankfully there are avenues for help and while social media can in some ways be almost overpowering at times, it provides an invaluable communication forum for groups to support people that may otherwise be isolated. I recently joined some closed Facebook groups of parents who have a lost a baby or babies in a multiple pregnancy and in other circumstances. It is difficult, but helpful, to read other stories of baby loss in a twin pregnancy and be able relate to them. Seeing other younger women in particular opening up about their stories, helped me to accept that what I went through was traumatic and introduced me to a more productive way of opening up about issues involved. Talking to and linking up with other bereaved parents who have also lost a twin, has given me the strength to feel comfortable enough to speak about Niamh to others outside my family. I have always wanted to be “allowed” to share the fact that I had a daughter as well as a son and that they are twins, rather than brushing it under the carpet. One of the people in the Irish Neonatal Health Alliance, also named Niamh by coincidence, encouraged me to feel comfortable about opening up and sharing my story which helped me tremendously. I found it extremely difficult to do so even after all this time, but I am so glad I did. I am so glad that there is more support now for those who experience loss in a multiple pregnancy as it’s a really difficult situation to be in because you are trying to find a balance between the joy of one child and the loss of another at the same time. I am glad that there is beginning to be a heightened level of awareness that help is both essential and beneficial. Talking and sharing your experiences with people in the same circumstances is extremely helpful and therapeutic, and I would strongly encourage and recommend this to any parents in the same circumstances.

I sometimes wonder what it would have been like to have a daughter. I find myself trying to picture her and what she might have looked like. Shane is now 30 and is the light of our lives. We also have a beautiful Grandson Luke, who brings us so much happiness.