Apnoea is a period when the infant forgets to breathe; this is common in premature infants. When an infant is on a ventilator it doesn’t matter if they take a pause in their breathing. Once the ventilator has been removed, any pauses are a cause for concern. CPAP can help limit this, but infants coming off ventilators will be fitted with a monitor that will set off an alarm if they pause for too long between breaths.

If the infant stops breathing the medical team may help re-start their breathing with a procedure called “bagging”. A mask attached to a soft plastic bag or neo puff is placed over the infant’s face, and the bag is squeezed to gently push air into the infant’s lungs and stimulate them to start breathing again.

BiPAP is similar to CPAP and works the same way as CPAP but it delivers a slightly higher pressure on inspiration (when the infant takes a breath).

This type of monitor is normally strapped gently to the infant’s foot or hand. The monitor shines a red light through the skin onto a sensor that monitors the level of oxygen in your infant’s blood.

Some infants require breathing assistance but do not require a ventilator. The CPAP machine continuously blows warmed moist air and oxygen into the infant’s lungs under a slight positive pressure. The air and oxygen can be delivered by nasal prongs (soft plastic tubes inserted into the nose) or by a mask fitted over the infant’s nose. The prongs or mask are held in place by ties to a cap on the infant’s head. The infant is doing all the breathing but the positive pressure from the CPAP machine prevents the lungs from emptying completely, therefore making breathing easier.

CPAP can be used to help the infant transition from the ventilator to breathing unaided. It is not uncommon for infants to require CPAP on and off for many weeks as the lungs mature and develop. 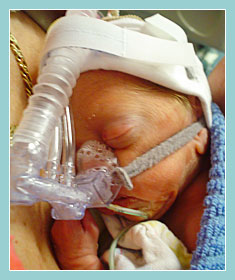 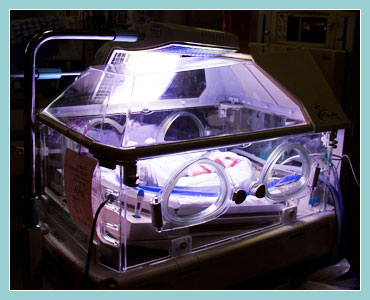 A premature infant’s primary need is to keep warm and placing the infant inside an incubator meets this need. There are 2 types of incubators, a closed box incubator with hand-sized holes in the side and mechanisms to circulate air and humidity inside and an open top incubator which allows greater access to the infant. The temperature of the later can be regulated in two ways, by using the incubator controls or set up to respond to information provided by a small sensor on the baby’s skin.

The infusion pump is used to control the rate that fluids, feeds and medications are given to the infant.  They are sometimes referred to as syringe pumps or syringe drivers. 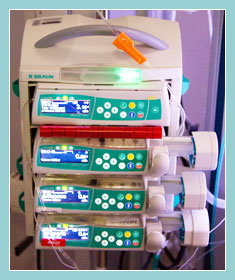 Intravenous lines are used for infusions of fluids, nutrition or medication. An IV line is a fine tube threaded into one of the infant’s veins (in the arm, umbilicus leg or scalp). Pain relief , such as sucrose, can be given to the infant for insertion of the line. Once in place the line does not cause pain. On occasion a line is inserted into a deeper vein so that it will last for a longer period of time and this is called a Percutaneously Inserted Central Catheter (PICC) line of Long Line.

A ventilator is a breathing machine which can either help, or take over completely the breathing of the infant.  A soft plastic tube (an endotracheal tube) is passed through the infant’s mouth and into the trachea or windpipe. The other end of the tube is attached to a ventilator that blows warm moist air and oxygen into and out of the infant’s lungs. 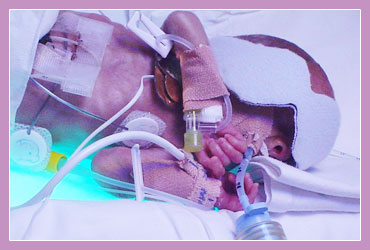 Some infants require low levels of oxygen when they have been weaned off CPAP. This can be given through the incubator or through tiny tubes placed by the nose called nasal prongs.  Some infants may required this oxygen for a prolonged period of time and some infants go home from hospital with nasal oxygen.

Nitric Oxide is a gas that is naturally produced by the body and helps relax the blood vessels. Occasionally this gas is required to help ventilation by relaxing the blood vessels in the lungs. The gas is given directly into the lungs via the breathing circuit of the ventilator.

Vital signs refers to markers that show how well the infant’s major body systems are working (breathing rate, heart rate, blood pressure, temperature and oxygen saturation). Small pads may be placed on the infant’s chest with cables running to a monitor. These pick up the electrical signals given out by the infant’s heart. The monitor checks that the heart is beating properly. The pads can also detect changes during breathing. Prolonged pauses in breathing may trigger an alarm. 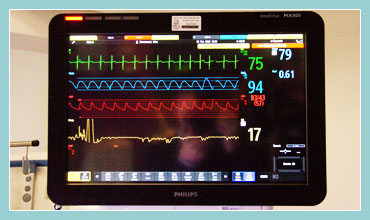