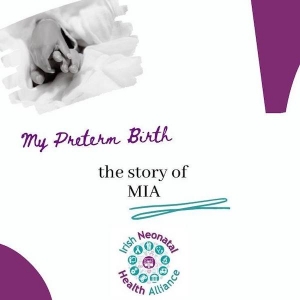 “At my 5 months anomaly scan on my twin girls Mia and Emma, we found out that Mia had a heart condition called hypoplastic left heart syndrome”. From that moment on, Mia and Emma’s hearts and growth were scanned regularly to make sure they were doing okay.

At one of the scans, the consultant said to me that Mia might be born alive and if she were, we might have to think about palliative care for her depending on how she was doing. She was a twin and as twins tend to be more likely to be born prematurely, it was a worry that she might not be big enough for the heart surgery that she needed. My focus became keeping Mia and her twin sister Emma in utero for as long as possible, so that they could continue to grow and get bigger and stronger. I was told that they were “big” babies and therefore, I held out hope that Mia would be big enough for the heart procedure at her arrival.

When I was 30 weeks pregnant, I was admitted to hospital because my blood pressure was going up and up and I worried that the twins were going to be born too soon. With medication, my blood pressure was controlled, and we continued to hope that Mia would not be born early and would have the chance to grow some more. However, 2 weeks later, at an early morning scan, we got the news that Mia’s heart had stopped. She had died.

Up until then the consultants focus was mainly on Mia but now it became Emma’s turn. I remained in hospital so that Emma’s heartbeat could be scanned each morning and evening and listened in with the doppler every 4 hours and that I could meet the consultant each day. I hoped and prayed that Emma would have the opportunity to get bigger and stronger and would be born healthy and alive. Amazingly, Emma grew in utero for another 4 weeks beside her sister and she got to 36 weeks. Both Mia and Emma were born by c-section in April 2015.

Emma was born first weighing 6lb 3oz. She was pink, beautiful, petite and quite skinny. I stressed as the paediatrician took her as her breathing was “crackly” and they tried to calm her down by placing her on my neck and chest for skin-to-skin contact. Mia arrived 1 minute after Emma. The bereavement midwife dressed her in a little gown and tiny, tiny nappy. She was 3lb 6 oz and was so beautiful with pink, rosy lips. The likeness between them was surreal.

My husband took some quick photographs of us with the twins. Emma’s breathing was still a bit “crackly”, so she was brought to the Special Care Baby Unit for a short while. I felt relieved that she was getting the care she needed and my anxiety about her health eased a bit.

I remained in the recovery room with Mia – it was lovely to spend such precious time with her.

Mia will forever be in our hearts and minds. She is a big part of our family and will continue to be for the rest of our lives.”