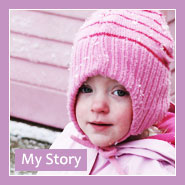 Having had our first daughter Grace at a healthy 41 weeks and weighing 7lbs 5oz we decided to try for baby number 2. We soon discovered that we were expecting again and were due on the 28th January 2013, I assumed our pregnancy would be easy and uncomplicated just like our first.When I was 11 weeks pregnant I had a small bleed and headed to the hospital to be checked out. Nothing untoward was found so I was sent home after a scan which confirmed that the baby was healthy. Between 11 weeks and 22 weeks I suffered from a few more bleeds some worse than others, each time I was checked at the hospital and each time there was no obvious reason for it. At 22+2 I woke up in the morning and knew something wasn’t right immediately. My waters had broken during the night (I hadn’t noticed until I actually stood up getting out of bed). I phoned the maternity ward and was advised to come straight into them.

When I arrived I was taken through to an examination room where the midwife explained that if it was my waters that had broken then there would be a high chance of going into labour naturally within 72 hours. A consultant came and did a test that confirmed that my waters had broken he also did a scan that confirmed that there was less fluid around the baby than there should be but that the baby had a healthy heart beat. The midwife then explained to me that due to the distance we lived from the hospital that I would be admitted and would not be allowed home until the baby was delivered whether that was within the 72 hours expected or at full term. So the waiting game began……

Each day that I was in hospital was obviously a bonus for us and especially the baby, thankfully the days ticked by with blood pressure checks, temperature checks, scans of the baby and then at 23+5 I received the steroids that would help develop the babies lungs which to me at the time was a huge milestone. Then at 24 weeks I was transferred from Wexford general to The National Maternity Hospital in Dublin as it had a neonatal intensive care unit just in case the baby was born early. 10 days after arriving I naturally went into labour and started having contractions and was taken to the delivery room, I was monitored all night having contractions roughly every 5 minutes. Thankfully and for no reason the contractions stopped. Breathing a sigh of relief we went back to the ward to rest. The following evening without warning I woke up with one very bad pain and knew instantly that it wasn’t good. I was rushed back into delivery where I gave birth naturally 9 minutes later.

Sophia was born on the 19th October 2012 weighing 1lb 14oz (840g) 14 weeks early. Immediately after Sophia’s birth she was looked after by the neonatal staff who ventilated her and took her to the NICU. Although the midwife took a few photos for me straight after her birth I only saw her extremely briefly as she was passing me to be put into the incubator. It would be about 5 hours before we got to see her again.

Sophia was born fighting from the start, she initially refused to be ventilated so started day 1 on CPAP but by day 2 as expected she was put on to a ventilator. Most of the first few days/weeks were a blur of blood tests, brain scans, testing for infections and learning to feed Sophia through her ng tube. I started expressing milk for Sophia and after about 3 days she was able to start milk feeds. After 6 days on the ventilator Sophia again decided that it wasn’t for her and she removed it herself so the doctors commenced her on CPAP again. This time successfully and she remained on it about 4 weeks. After 7 weeks in The National Maternity hospital it was time for Sophia to move on as she was doing so well, she was moved back to Wexford hospital where she should have been born originally.

In the special care baby unit there she was mainly at a feeding and growing stage and very healthy. During a routine eye test the doctor discovered that Sophia had a condition called Retinopathy of prematurity which would require specialist treatment that wasn’t available in Wexford so once again Sophia was on the road and was moved back up to The National Maternity Hospital and had laser surgery on her eyes the following day. After a period of recuperation in Dublin Sophia was transferred back to Wexford again to continue the feeding and growing stage.

When Sophia was about 10 weeks old she started having episodes where she would turn blue and her breathing would slow, each time she would have to be stimulated to breathe again and sometimes required oxygen. During this time Wexford hospital ran a series of tests and also had their own speech and language department come and assess Sophias feeding abilities. With no obvious signs that anything was wrong once again we were transferred back to Dublin this time to Crumlin childrens hospital.  We soon discovered that Sophia was aspirating some of her bottle feeds so fluid was going down into her lungs instead of her stomach and this was causing her “blue” episodes. Once the problem was discovered Sophia was put back on her NG tube and the episodes stopped. Sophia was finally discharged home after 135 days. 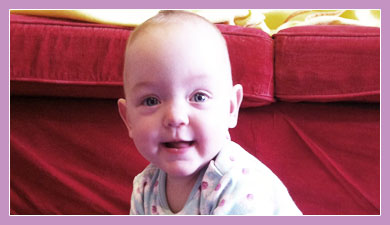 Once home we soon fell into a routine of follow up appointments for Sophia and gradually they got less and less. Sophia is now 2 and a half years old, she suffers from bad chest infections over the winter months which require inhalers, medication and occasional hospital stays but other than that she is a healthy mischievous 2 year old. Sophia still requires her drinks to be thickened with carobel to help prevent aspiration but that is a small price to pay to have a helthy, happy 2 year old.

Two and a half years on and we have a lovely healthy mischievous 2 year old. Sophia still has follow up appointments with ophthalmology although so far has required no follow up treatment on her eyes, speech and language who are monitoring her swallowing issues and a dietitian who is still monitoring her growth.  She currently has no developmental delays, has fantastic speech and language, no gross motor isuess. She has been discharged so far from physiotherapy, passed her hearing test with flying colours and most recently discharged from the care of the National Maternity hospital. Hopefully with a few more appointments in the coming weeks more discharges will follow.