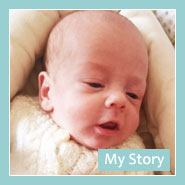 Thursday 29th January was the day that changed our lives. I woke up that morning and expected the day to be much like other days. We were not prepared for what the next 48 hrs would bring. I had had a small pv bleed during the night. Nothing that worried me too much as I  had quite a lot of them on my first pregnancy. However I am rhesus negative so I knew I had to call the er as a routine procedure in order to get anti d. This is what I did. As predicted they asked me to come up. And I did.  While in the ER room they checked baby on the trace machine. Everything was ok. They were happy to let me home. I felt absolutely fine and there was no bleeding to be worried about. Then one of the midwives commented that she would prefer if I saw the registrar before I left.

I didn’t have a problem with this. I felt They were dotting the I’s and crossing the T’s and I went along with it.

The registrar said that as I was only 29 weeks she would like to give me the Dex steroid injection as a precautionary measure. I said ok. But it meant a night in hospital as it consists of two infections 12 hrs apart. I saw this as an opportunity to get some rest and told Mike I would call him in  the morning when I knew what time I was being discharged.

And so they admitted me. I had the first injection at 1pm on 29th. Following on from this a scan was done. All was well with baby. The sonographer commented that babies head was down but said nothing more. It was a full developmental scan and all looked to be ok. I returned to my room to rest and read a good book. There had been no further issues or bleeding of any sort and I was not in anyway anxious or worried.

At 1am the midwife came in to give me the second Dex injection. I was struggling to sleep due to snoring roommates!!!! I was messaging my friend in America. At approx 3am I got the first pain. I didn’t think contraction. It came and went. This continued and at 4:45am I got a particularly bad pain. Much as I did not want to admit it things began to register. For the first time I allowed the thought that I might be in labour to creep into my head. With a real sense of dread I pressed the button for the midwife. She called the registrar. It was confirmed that I was in early labour. My deepest fears and worries came true in that moment.

It is very difficult to express or articulate the range of emotions I experienced in these moments. In order to do so I think back to when I was in hospital having our first son. In the middle of the night a woman went into early labour. I remember hearing her tears and her sense of panic from behind the curtain. It suddenly dawned on me that I was now the woman behind the curtain. It was now me crying. Me panicking. I remember saying over and over again the words it’s too early. It’s too early. The fear that enveloped me that day will always be with be. I’ll never forget the pure dread I felt. I feared for the life of our precious unborn baby. I was truly petrified at what lay ahead. 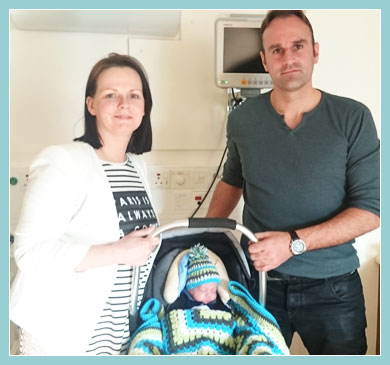 I called my husband. It was 5:06 am. I didn’t know what I wanted him to do. He had Noah so was pretty helpless till first light when he could drop him to the minder. I also called my sister in Tralee. Again not knowing what I wanted or needed from her. At this point I had been transported down to the high dependency unit where they told me they would do their best to stop my uterine contractions. I was given tablets to take. I was given medication to help our baby if he did in fact arrive. All the while still experiencing contractions. I began to time them. They were five minutes apart. Panic surfaced again. It was now 9:05 am. I asked to walk.to the bathroom. This told me all I needed to know. I instinctively knew that our baby was going to arrive,  no matter what the medical staff thought.

At 11am the doctors confirmed our worst fears and I was moved from the high dependency unit into the delivery suite. I was totally enveloped by fear. Fear for our unborn baby.  fear of the unknown. Soon enough mayhem started as our little boy announced his arrival into the world. He came so fast we called him the rocket man. The room was full of medical personnel… all with their own role to play in ensuring the survival of our precious bundle.  It was really like a scene out of a TV programme. I could not hear him cry… I looked at Mike and my sister who was with us for the birth for reassurance. Mike told me to listen: sure enough I could hear a tiny little whimper. That was our son; about to embark on the fight for his life.

And so 6 hours later we were taken to see our tiny baby boy in the nicu unit. Nothing really prepares you for that moment. The feelings of fear and panic as you look at your baby – because look is all you can do.

This wall of imposing glass exists between you and your tiny baby. The Giraffe Isolette Incubator.  It’s a hindrance but a necessity. I remember looking at Jacob and feeling so helpless. He was lying flat on his tummy. It was impossible to really see him amongst all the tubes that surrounded him.  The imposing oxygen mask stopped us from even being able to see what our precious boy looked like. But what I noticed the most was his skin. It’s translucency. It’s sticky feel. We longed to hold him properly,  to cradle him. But for now a hand through a porthole was all we were allowed.

The nicu changes you. As a person. Your outlook on life. It changes the way you look at the world. You go in as one person and come out another. It’s not only about your own personal journey. It’s about the people you meet. The other parents and babies. The nurses who care for your baby when you’re not there. It’s an unlikely playground for the formation of new friendships. We spent 6 long and arduous weeks in the cumh nicu – a time that challenged us in every way possible.  Jacob turned out to be a right little fighter and every day brought progress. 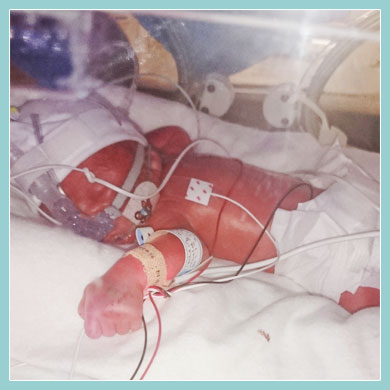 Nothing prepares you for the setbacks… You have to dig deep and find a way through. 8 hrs a day, every day. Watching him grow. Kangaroo care. Watching him fight for life. Coping with the guilt of not being at home with Noah. Waiting anxiously for the day we would be told we could reclaim him from incubators, tubes, monitors, bradys, desats, and know he was truly ours. Today as I write this Jacob is home one week. Nothing beats that feeling- finally having him home. Introducing him to Noah.

Our journey continues even though we have left the the nicu behind. It’s bitter sweet really. It becomes your extended family. The fear of losing the security blanket of the nicu unit. Both our children are miracles in our eyes. But Jacob – mommy and daddy are so proud of you for making it and we are eternally grateful to all who helped us travel our road: family, friends,  strangers; but most importantly the doctors and nurses of cumh nicu: from small acorns grow large oak trees in the hands of heroes.