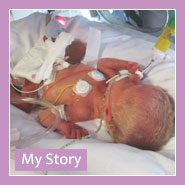 I fell pregnant with twins when my daughter was 12 months old, and was quite a shock to the system. It was soon discovered my identical twin girls were Monoamniotic, a very rare and very dangerous twin pregnancy. They were both in the same amniotic sac, a massive danger to each other from conception. The mortality rate is 50%, (according to the statistics at that time) so I was closely monitored, and constantly reminded by the hospital they could die at any moment. As if being pregnant wasn’t a scary enough time I had this to contend with too!! The main reason for death was cord entanglement, without this special protective sac they are a danger to themselves and each other. The longer the pregnancy continued the higher the risk. I began researching, spending hours upon hours reading stories, medical notes, and ploughing through websites. All the while rubbing my belly with as much love and affection as I could muster.

I tried to educate myself as best I could to ensure I was doing everything correctly, and to give my girls the best possible chance of survival. There was so much negativity surrounding this type of pregnancy, and being the person I am, I tried my best to stay positive, send positive vibes to my babies and focus on a successful and happy ending. No one would ever question my commitment to do my best for these beautiful babies.

On June 8th 2010 a routine scan, at 29+6 weeks, showed one of my precious girls had died, I had named her Emily. I had gone to the scan that morning on my own, something I will never forget, and my poor consultant had to leave the room to compose herself, as she had really thought they were both going to make it. I was in a daze, I knew it could happen at any stage, but I chose not to believe it, as they were doing so well. The race was on to save my other little girl as she was making herself anaemic trying to save her sister. After meetings with specialists and various neonatologists the decision was made to have an emergency section to save her sister. She was going to be 10 weeks premature but we all felt the risks in the womb greatly outweighed the challenges in the outside world. My life was then thrown into the world of prematurity and bereavement, all in the same day.

Heidi was rushed to NICU where she was made stable and fed vitamins through her belly button for the first couple of days. I didn’t get to meet her until next morning and it was so surreal, she just seemed so helpless, lost, in this big incubator. The days turned into weeks, she had good days and bad. She survived intubation, CPAP, 2 blood transfusions, MRSA, and a blood infection. Heidi was fighting it all, and winning. I spent every possible minute with her; watching her every move, watching her grow and thrive before me. I became obsessed with expressing my breast milk, as I could see the benefits right before my eyes. My life revolved around the ICU and getting her home to meet her family and friends. It was such an emotional roller-coaster trying to grieve for Emily, be strong for Heidi and not let my other little girl at home suffer from this horrible situation. I kept a journal, a day to day account of everything she went through in the hospital, all the treatments she received, little comments on how I was feeling, how great the staff were and how big she was getting. I found this very therapeutic; it was like my own little counselling session each day. 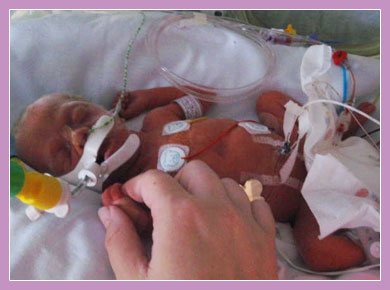 Heidi is in school now, and is best friends with her big sister Zoe. I went on to nervously have another baby, a little boy and they both love their little brother Charlie. We always miss Emily, and think of her every day. She’s a massive part of our lives and inspired me to work and volunteer with the Irish Neonatal Health Alliance, create my support website, a Facebook page and I’m also writing a book so hopefully I can help others through their Monoamniotic, premature or infant loss journeys. I’m so proud of Emily for fighting as long as she did, she’ll always be my hero.