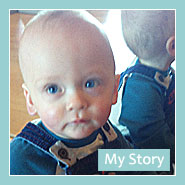 Again all went pretty smoothly until 20 weeks when my blood pressure started to rise again and I started taking medication. My BP continued to be an issue but the weeks were adding up. At 27 weeks I was admitted to hospital and after 3 weeks my BP was becoming difficult to stabilise as I had developed pre-eclampsia. At this point the decision was made to deliver Barry by c section. I was awake for this one and it was the best feeling in the world to hear our baby cry loudly as he was delivered weighing 3lb 2oz. Unfortunately Barry started to struggle with his breathing and so he was ventilated and taken to the NICU. After recovery I was taken to HDU and it was another 24 hours before I saw our little man. Before I got in to see him, the doctors met us to say that they had started Barry on a course of antibiotics as they suspected he had sepsis. This was a big blow to be getting bad news like this already. When I went into see him, it was very tough.

He was in the same corner of the NICU that Ellie May (Barry’s sister) had been in and walking in there again for the second time with our second baby was such a difficult thing to do. I had expected Barry to look different, stronger even than Ellie May as he was 4 weeks further on and weighed a lot more. But he looked just as sick as she had, just as vulnerable. He had all the same tubes, lines and monitors attached to him and the line for the antibiotics was in at that this stage too.

Thankfully he picked up from the infection quickly and was very stable on CPAP, compared to Ellie May his monitors rarely alarmed which was great and very reassuring. After a few days he was moved around the corner to the lower grade ICU and this was such a relief as it was just a little bit less intense out there. When Barry was 8 days old I met one of his nurses on the way into the NICU, she told me that Barry had been unwell during the night and they had stopped his tube feeds. He was cleared for infection and they suspected he may have a malrotation of the gut so he was sent to Crumlin for a contrast scan. Thankfully the scan was clear and everything settled after a few days.

Barry had done so well during the scan off CPAP that they decided to trial him off it that evening. I was very nervous about this as it had been a long drawn out and nerve-wracking process with Ellie May but Barry flew it. A few days later there was another concern that Barry was passing blood in his urine, this continued for a few days and he had scans and test which all proved to be fine. At 2 weeks old I was having a particularly emotional day as I had only gotten to hold Barry once. Kangaroo care had been planned for that day but it was a really busy day for the nurses and was looking like it wasn’t going to happen. I was upset and went outside for a few minutes and when I came back I was greeted with a great surprise as Barry had been moved up to SCBU!!! Ellie May had never made it to SCBU as she went home straight from HDU. SCBU was much less intense than NICU, much fewer alarms, much fewer doctors and generally a more relaxing environment to take your baby out and have cuddles with him.

We had hoped that Barry would get a transfer to Portlaoise but for one reason or another, the Doctors were reluctant to send him down. They kept saying that they just weren’t 100% happy with his colour and that he was a little bit more delicate for a 30 weeker than they would expect. At 35 weeks gestation, he was given the ok for transfer. We were really happy about this as it had been very difficult and stressful trying to split our time between Barry and Ellie May and we hoped that it would be easier if he was closer to home. It was such a happy morning packing up his bits and pieces in the Coombe. Within a few hours of being in Portlaoise, Barry became extremely ill. He was deteriorating rapidly before our eyes. The doctor and nurses were in the process of transferring him back to an incubator and putting him on CPAP and he completely crashed and had to be resuscitated. It was the most horrific and terrifying night of our lives. We were asked to leave the room and they seemed to be working on him for hours. The Doctor eventually came out to us and told us that our little boy was very very sick. We heard that horrible term “life threatening” again. It was so surreal as we had been so happy and optimistic just a few hours before. They arranged for Barry to be transferred back to the Coombe. 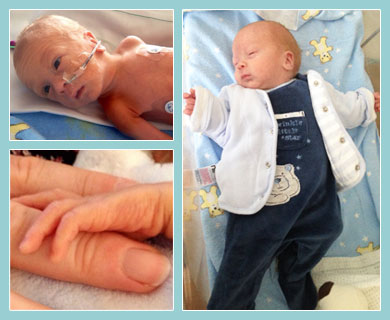 We were and still are so grateful that the Coombe staff were on duty for neonatal transport that weekend. We knew the Doctor and nurse who came to collect Barry and this was again a great comfort.  Barry responded well to the antibiotics and transfusions and after 36 hours was out of the woods and off the ventilator after 48 hours. He spent another 2 weeks in hospital and then we brought him home to where he belonged with us and his big sister who was so looking forward to having him home and also to having her mammy and daddy back. Barry had a double hernia repair at 6 weeks corrected. He will also need a surgery to correct a hypospadias and will have cardiac follow up in Crumlin for his VSD. Apart from that he is doing incredibly well, he is full of fun and devilment and well able to fight his corner with his sister when it comes to “sharing toys”.